Ten Features of the Metro Environment in Windows

Windows 8 is all about Metro. What are the unique advantages of Metro that are generating all the buzz?

Since I posted our initial article describing how to use the touch motion of the Windows 8 Metro Environment, many people have dropped me questions about this revolutionary new user interface from Microsoft. It is a radically different both functionally and visually from prior versions of Windows. Some people are intrigued, while others are appalled. For Microsoft, this is a bold step.

Obviously, Metro is Microsoft’s attempt to simplify Windows. The iPhone and iPad have exploded in popularity because their use is intuitive. Metro is Microsoft’s translation of this simplicity to the desktop. While the visual cleanness (and lack of familiar landmarks like the Start button) will be what new Windows 8 users will notice first, the Metro environment actually brings several advantages under the hood as well.

1. Metro applications are Sandboxed. Each application is separate and isolated from the operating system itself. This is one of the reasons that iOS and unix applications have been inherently more secure than Windows applications. If an application on your iPhone dies, it typically does not require you to restart your entire phone; however, rebooting a badly behaving Windows box is so common that even our grandparents know to do it. By having each app isolated, the stability of the system should be improved.

2. Metro applications are downloaded and purchased from the Store. This is very similar to the App Store on iOS and OS X devices. This will make applications more secure. However, developers will also be forced to publish and distribute their applications in this manner. Buying software and shareware through individual companies will soon be gone for both Apple and Microsoft. If you want to buy or sell software for their system, they are now going to get a cut.

3. Software updates are centralized. On Windows systems today, finding updates for all the current applications can be difficult. Many applications run update checkers in the background which inevitably slow systems down. By having all the Windows applications in the Store, all the applications can be updated efficiently. Updated applications are also less likely to have security holes which makes the overall process safer.

4. Metro applications are cross-architecture. The way a Metro application functions on the desktop will be the same as it functions on a tablet or on a Windows Phone. Using the new Windows runtime WinRT, programmers can create for all compatible architectures at once. No longer does a coder have to worry about the difference between the calls of the x86 versus ARM architectures. Also, WinRT allows the user interface to be designed using familiar HTML or javascript. Plus, the power savings typically found on mobile applications can now automatically translate to the desktop applications as well.

5. User logins are now Microsoft accounts. By tying the Windows 8 user account to an account on Microsoft’s servers, sharing data between devices and into the cloud is now painless. Just as an iPhone and an iPad sharing the same Apple ID can share information easily, all Windows devices sharing the same Microsoft account can do the same. We are getting closer and closer to a time when the user will not have to think about where the data is stored. A document saved from a home desktop can easily be accessed by a work computer, tablet, or phone. As the cloud becomes transparent, a user’s data become uniformly available from anywhere.

6. Metro apps are full screen. Ironically, Windows applications will no longer be in windows. When a Metro application is started, it will take up the full screen. Docking it where it only takes up one quarter of the screen is possible. However, the windows analogy is gone. Although switching from app to app is only a finger swipe away, multitasking will be more difficult. Forcing apps to be full screen is a predictable move when trying to provide a constant user interface over many different devices. Not surprisingly, each version of Apple’s OS X is pushing toward more full screen application presentation as well.

7. Metro supports live tiles. As I am typing this, my weather tile is updating the temperature and the cloud cover. My number of unread emails is displayed. My photos tile is showing a slide show of all my recent images. Live tiles provide a way to present essential information directly from the Metro start screen without actually opening the application. 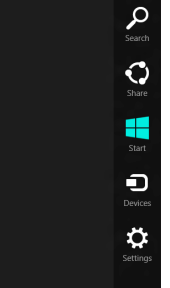 8. Charms are consistent through all Metro apps. Functionality is greatly improved when consistency exists throughout the user interface. Menus being at the top of the screen or window is such an example. However, as Metro moved away from windows to fullscreen applications, menu uniformity needed to be rethought. The Charms that can be dragged out of the right margin provide this common method of accessing the most frequently used options–search, share, devices, and settings. If you are in Solitaire, the settings option will tweak your game. If you are in Weather, the same settings charm would be used to change your units from fahrenheit to celsius.

9. Popular online services are integrated. When opening your Photos Metro application, you are immediately asked if you want to access pictures from Facebook and Flickr. Posting updates online will be as simple as accessing the Share charm from any appropriate application. Seamless integration of the services seems to be a priority (although who makes it as the default services should make for interesting politics).

David Kirk
David Kirk is one of the original founders of tech-recipes and is currently serving as editor-in-chief. Not only has he been crafting tutorials for over ten years, but in his other life he also enjoys taking care of critically ill patients as an ICU physician.
RELATED ARTICLES
Windows 10

How to do a shutdown on your computer

How to move a user folder on Windows 10