This guide is an overview and explanation of what the Sony PS3 Backup Utility and Transfer Utility settings do.  There are a lot of misconceptions and blatantly wrong information out there about the PS3 backup options.  Let’s clear them up and get down to the facts.  We’ll start with a quick introduction and then get down to some PS3 backup business.

Video game consoles have evolved greatly in the last decade and in turn they have become more complex and computer-like in design/power/functionality.   The PS3 is no exception.  It has a Blu-ray Disc Drive, Discrete graphics card, multi-core Cell processor and computer laptop harddrive.  The original launch PS3s came in the 20GB and 60GB flavors.  Later models added 80GB, 120GB, 250GB and now 320GB harddrives.  With a built-in harddrive, your game saves, videos, settings, movies, music all gets saved to it.

Like a computer, its usually a good idea to have a backup since game consoles are more likely to fail (again due to the added complexity of them) than previously.  Sony finally updated the Backup Utility on the PS3 and also with the introduction of the Slim added another feature, Data Transfer Utility. 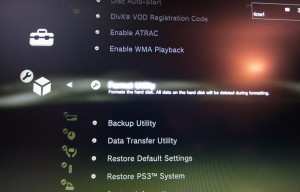 When you enter the menu, you get three more options:

–Back Up
–Restore
–Delete Backup Data

These options are pretty self-explanatory.  Back Up will do a FULL backup of your game saves, game data, games, videos, music and photos.  There are a few limitations per Sony, however if you backup your PS3 and get a new hard drive but use the same PS3, all of my data has backed up and restored fine.  However, copy-protected game saves WILL NOT restore on a different PS3 than the one you originally backed up the data from. This is very good to know if your getting a new PS3 Slim and had a PS3 Phat; you would want to use the Transfer Utility in this case (more on this later).  However, if your just going to upgrade your factory PS3’s hard drive onto the same PS3, a Backup will do the trick.  Also, all data is copied to the backup you can create on an external hard drive so PS3 still has the original data.

-Key points, you can restore a backup and all data back onto the same PS3 and get all of your content back.  However if you restore on a different PS3 than original backup was from, you will not get any copy-protected data back and have to redownload DLC that is protected too.

I would recommend a Backup first and then data transfer (that way you can restore the backup to the PS3 you just transferred from).  Also be sure to Sync your Trophies on all accounts before doing the Transfer.

If your TV has Picture-In-Picture (PIP) or Picture-By-Picture (PBP, even better!) options, I would use them to do the transfer since you need to follow the on-screen instructions.

Harddrive MUST be formatted in FAT32 for the PS3 to recognize it.  Most harddrives and XP/Vista/Win7 will only allow you to format harddrives over 20GB to NTFS and not FAT32.  Use a tool such as Fat32Format (this is a command line based utility).

You cannot copy copy-protected game saves to a flash card or memory card, again the Backup utility is needed to backup these files.  Yes, annoying.

If you just want your game data, I would recommend deleting all of your Movies, Music and Pictures before doing a backup.  You can also redownload purchased movies however it may be easier to leave them on the harddrive.

I had about 340GB of used space on my PS3 and my backup took over 15 hours.  So if you have copies of the items on your PC, you may want to delete them off your PS3 before hand and then just recopy back to PS3.

After you backed up your data, think about doing a harddrive upgrade.  Its cheap and well worth it. Nothing beats streaming/internet issues than having all your data locally on the PS3.

Backing up your PS3 data to external harddrive

Jimmy Shttp://blogs.tech-recipes.com/jimmyselix
Jimmy Selix is an early adopter that loves to be one of the first on the block to have the latest and greatest in technology and gadgets. Another love of his is being able to share his knowledge to others seeking it. Feel free to drop any comments or questions that you may have.
RELATED ARTICLES
Entertainment