OS X and Unix Terminal: There are stopped jobs. 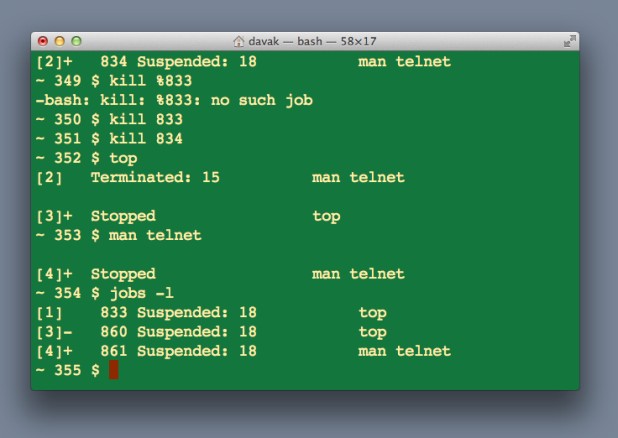 Users trying to exit Terminal sessions are often blocked by the reporting of stopped jobs. Discovering, restarting, and killing these processes are essential lessons for mac and unix users.

Susan tweeted me the following yesterday:

After I completed one of your mac tech-recipes tutorials yesterday, I was unable to logout from my terminal session in OS X. The message that “there are stopped jobs” appeared and prevented me from exiting. What did I do wrong?

When this occurs the terminal will hide the program and notify you with a command like this:

The [number] is the number of programs currently in the background. The plus sign shows it is the most recent to enter the background. The last word is the program that was actually stopped. In my example, I used control-Z to stop the top application.

To view a list of all background programs, use the jobs command.

In my example above, you can see that I have 4 stopped applications. I have top in the background three times and man telnet once.

Through the terminal the fg command will bring the last program back to the front. This will be the application marked with the [+] via the jobs command. Once the program is back to the foreground you can exit it properly instead of stopping it. For example, one would completely exit top or man by pressing the q key. Additionally, control-c will typically kill the program compared to control-z which stops it.

Additionally, you can switch to a specific stopped program through the job number. For example, this would switch to the [2] marked program:

You can also stop programs through the kill command. To use the kill command, we will need to access the process id numbers (PIDs) of the stopped jobs by using the jobs -l command:

The -l addition to our jobs command displays the PIDs. These are the numbers that are not in brackets. These are 833, 860, and 861 in our example above.

Using the kill command with a program’s PID will terminate that application. If we wanted to kill the man process in our example, we would use the following command:

Additionally, as a shortcut you can kill all programs listed through the jobs command through the following code: