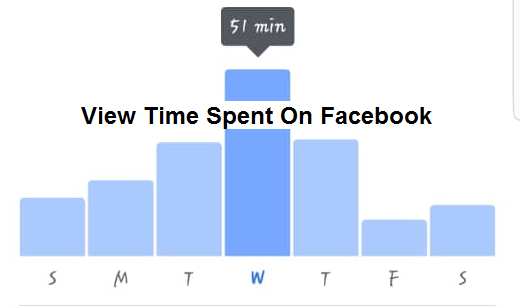 Facebook recently announced a rather unexpected feature: the social network giant is making it easier to keep track of how much time you are spending on Facebook. You already know you are probably spending too much time on Facebook, but if you are curious exactly how much of your day is being consumed by the platform, a new tool can help you find out.

Facebook has a new feature, called “Your Time on Facebook,” which will let you know just how much time you spend liking posts, watching videos, and debating politics on the platform. The feature is slowly being added to most user’s options, with a full rollout expected over the next couple of weeks.

“We want the time people spend on Facebook to be intentional, positive and inspiring,” the company said in a blog post announcing the features.

“Our hope is that these tools give people more control over the time they spend on our platform and also foster conversations between parents and teens about the online habits that are right for them.”

The feature, at least initially, is focused solely on mobile users and does not appear to be available to users who access Facebook or Instagram via a desktop or laptop computer.

If you find that Facebook is consuming too much of your spare time, the social network is also offering tools to help you curb usage, including alerts when you have spent more than a set amount of time on either app and daily reminders of how much time you spent browsing the previous day.

To make use of this feature, you will need to use the mobile apps. And that’s where a significant caveat comes in: it only tracks how much time you spend on Facebook on your phone. Any time spent on Facebook or Instagram in a normal browser won’t be counted.

So, that kind of makes it less useful. However, if you are the kind of person who mainly interacts with Facebook or Instagram on your phone, then it can really help shed light on whether you might be addicted to your smartphone.

If you are not seeing the feature yet, it’s because it’s still in the process of rolling out.

If Facebook’s recent measures just aren’t enough, there are plenty of apps out there that can help you fight your smartphone addiction, and encourage you to spend less time staring at a screen.

Below are the steps involved in accessing this feature:

2. From your feeds screen, tap on the three horizontal lines

5. A dashboard showing your time on the platform will appear on the top.

6. Tap on any bar to see your total time for that day.

Note that the app only tracks usage by device, so if you check in on multiple devices a day, it’ll be harder to track just how much you’re using Facebook. The company, though, hopes this could be a way to hang on to users who might otherwise terminate their accounts on fears they are spending too much time scrolling through feeds.

While this tool may not give you the most accurate measure, it does give you a rough idea of how active you are on Facebook. And that can get you started on a Facebook time management plan.

I can’t tell you how well it’s been maintained or how close the tally is, but I can tell you it’s fun and it’s free! Try it out and let me know what you think.