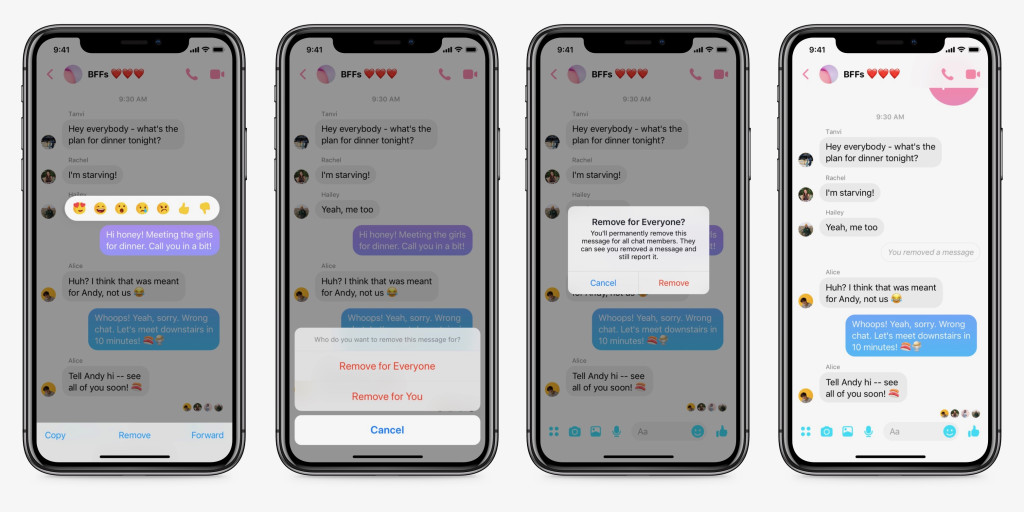 Facebook Messenger now allows you to unsend messages. Facebook has followed through on providing users with an option of unsending messages after it was revealed that Facebook CEO Mark Zuckerberg had access to the explicit option last year. Here is how this new Facebook option with a limited time works:

Facebook was working on the new unsend messaging feature with a 10 minutes time frame. Below is how the company describe this new feature.

As reported by TechCrunch, Facebook is now rolling out the unsend feature called “Remove for everyone” to all users starting today for its Messenger platform.

It was way back in April last year that news first broke out that Mark Zuckerberg was removing private messages after he had already sent them. As it was reported by TechCrunch, the Facebook social media platform is now rolling out a new unsend feature known as “Remove for everyone” to all its users.

The “remove for everyone “ feature helps you pull back poor choices, typos, embarrassing thoughts, or any other unintended sent message. With a time frame of ten minutes, users will see a few options when clicking or tapping on the message they have sent. For up to ten minutes after sending a message on Facebook, the sender can easily tap on it and they will find the delete button has now been replaced with the “Remove for you”, but there is also a “Remove for everyone “ option that deletes the message from the inbox of the recipient.

However, those you have sent the messages to will still get a notification that a message was deleted.

They will see an alert that you deleted a message in its place, and could still post a report on the message to Facebook.

Below are steps on how to delete sent messages on Facebook messenger:

1. On a chat screen, tap on the message you wish to delete.

3. Tap on delete for everyone.

What do you think? Is this something you will find useful or is it just another unnecessary complication? Please, share your thoughts via the comment box below!