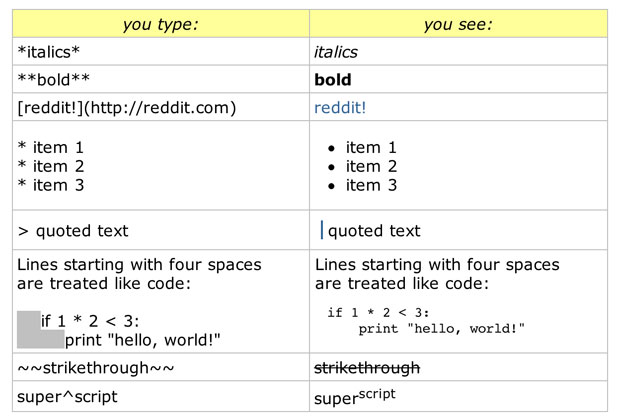 Although the Reddit formatting help documents are pretty good, several common formatting tricks have been left out. Here is how to do them.

That being said, if you know of these undocumented formatting tricks, you can layout your comment in a more readable and understandable manner.

A typical line break (by pressing ENTER) will add space between your previous line and your new line. This is the default paragraph break which almost appears double-spaced. Tighter line breaks without spacing (or single-spaced appearing) can be accomplished by adding two spaces to the end of your line before pressing ENTER.

If you do not want Reddit’s markup styles to engage, you can use slashes to escape the formatting characters. This is frequently used if you want asterisks to display instead of causing the italics or bold formatting.

The html <pre> tag initiates the monospace style that is frequently used for displaying code blocks. This can be generated through two different methods in Reddit comments. Starting a line with 4 spaces will force the entire line to be monospaced. If you want to use monospace within a line, you can use tick mark to tag the monospace style. 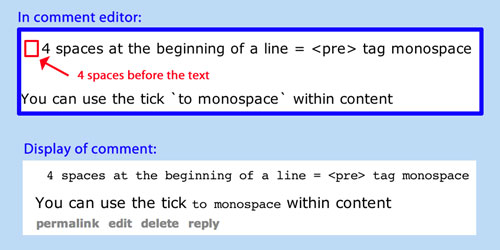 At the lower right-hand corner of the comment editor is the formatting help link. The typical formatting markup can be found there.

If you know some formatting tricks that I have missed, please post them in the comments below. If it is legitimate, it might yield you some Reddit Gold.

David Kirk is one of the original founders of tech-recipes and is currently serving as editor-in-chief. Not only has he been crafting tutorials for over ten years, but in his other life he also enjoys taking care of critically ill patients as an ICU physician.