Many Nikon cameras use the CHA or CHR error syntax for a variety of common errors. Common culprits and associated fixes are included.

I have been using Nikon cameras for quite a while. I have experienced several different circumstances where the Nikon will throw a CHA or CHR error message. Typically, these errors are directly related to SD memory card.

I believe Nikon officially refers these to CHA errors. A couple of my photog friends refer to them as CHR errors. The confusion is that on the Nikon screen, the difference between the letters A and R are not clear. 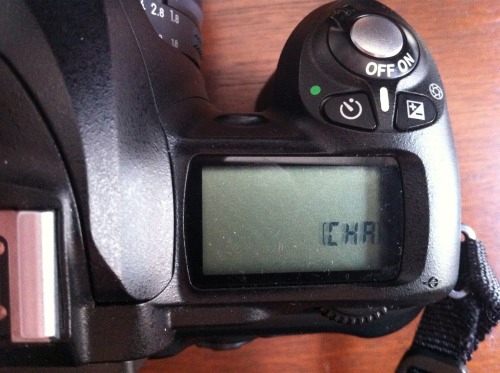 Before formatting or manipulating a SD card that is giving errors, always been sure to copy the images to another device such as a computer. If the computer cannot read the card and you have images on it, you will need to attempt to salvage your photos with some type of memory card recovery software first.

1. Unformatted card. Buy a SD card, throw it in, and you get a CHA/CHG error. Using the camera’s format command will fix it. Most people figure this one out.

2. Wrong size or type of memory card. If your new SD card does not work after formatting or if the device refuses to format it, it is very impossible that the SD card is not compatible with your camera. Most frequently, this is due to the SD card being too big. Many popular Nikon cameras like the D50 cannot handle large SD cards. Updating your firmware occasionally helps with this.

3. Write protection enabled. On the side of SD cards is a slider that prevents a device from being able to write to the card. Often these sliders get accidentally enabled when putting the memory card in or out of the device. Move the slider away from the “lock” selection and try again.

4. Bent or broken SD camera pins. If a card is forced in backwards or at an awkward angle, the pins in the camera that serve as digital connectors can get damaged. If multiple SD cards do not work, repair may be the only option.

5. Failing or Buggy SD memory. If a card is failing or contains errors, often it will throw a CHA/CHR error. Move all the pictures off the card and then attempt to use your camera’s format function to clear the memory. If that fails, you can try formatting it using your computer first. If you have to do this repeatedly, then the memory is likely failing. I am not typically concerned by the requirement for an occasional reformat.

6. SD card is full. Once a card is full, the Nikon will display this error. If the camera locks and you are unable to delete pictures off the card, just wait until the memory light quits blinking and then restart the device. Often the device will then allow you to delete images and resolve the error.