What Do the Mac Shortcut Symbols Mean?

Many new mac users have trouble deciphering the symbols used by Apple to describe keyboard shortcuts. Command, shift, option, control, and caps lock keys are all used in keyboard shortcuts and are represented by symbols. This brief tech-recipe references these symbols and shows where you can find this information on your mac system.

Time after time I see new mac users that are trying keyboard shortcuts by sequentially trying the control, option, and shift keys. They see the symbol for the shortcut, but they get confused between which symbol represents each key. Hopefully, this will help.

( ^ ) The caret symbol is the control key.
( ⇧ ) The single arrow up is the shift key.
( ⇪ ) The arrow up with the line under it is the caps lock key.
( ⌘ ) Most people don’t miss the command key since the symbol is on the keyboard.

( ⌥ ) The upper right to lower left slash with the line above it is the alt/option key. One hint to remembering this key is the symbol has two parts and the print on the keyboard has two words.

The following dialog box should confirm what I previously described: 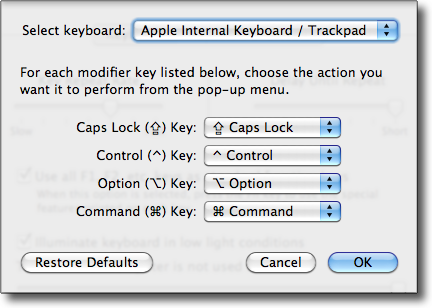 If you ever forget what the mac shortcut symbols mean, you too can reference the dialog box from your own system. It can be found under System Preferences -> Keyboard -> Modifier Keys… button.