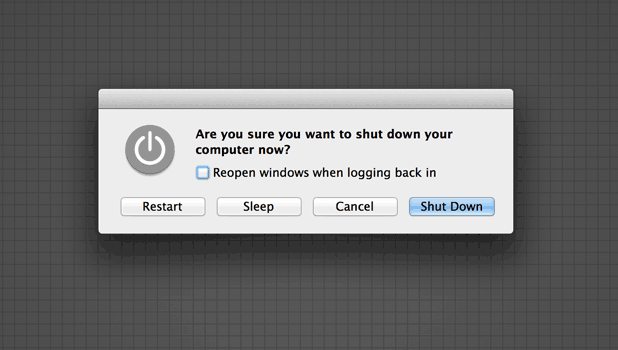 I have been heavily recommending that Apple users upgrade to Mavericks or OS X 10.9. Not only is it free, but it does not seem to contain all the typical bugs found in an initial OS release. With any update a few things will change, and this update is no different. The most common oddity is that the function of the power button on the various Apple laptops has changed. Previously, pressing the power button on my MBP would bring up the familiar power down options such as restart, sleep, and shut down. Now, the power button just turns off the laptop screen.

Although you cannot change the default action of pressing the power button, the old options are still there. To display the power down options within Mavericks just hold the power button. Instead of blacking out the screen, the old familiar options will appear instead.

Remember, that you can always turn off your system by selecting the Sleep, Restart, or Shut Down option under the Apple () menu as well.