Like any blogger and traveler, I love my portables and ultraportable laptops.  On October 20, 2010 Apple unveiled its updated Macbook Air line and introduced the smaller 11″ version.  Apple previously had said it would never build a netbook and has lived by its promise with the Air.  So, is the Macbook Air 11″ just an expensive netbook or is it finally the official hackinstosh (OS X hacked onto non mac hardware) ultraportable we’ve always wanted?  Keep reading for the full review and benchmark comparisons. 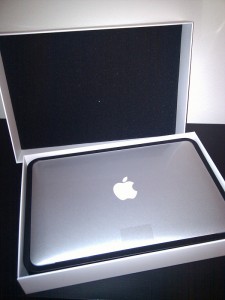 Apple introduced the original Macbook Air way back in January 29, 2008 for an incredibly expensive entry price of  $1799 for the non SSD based Air and up to $3100 with the SSD and 1.8Ghz C2D processor.  However its design did turn heads and even helped an owner miss his flight due to TSA not knowing what it was because of its thinness.  The price of what you got at the time was really not worth it for the general public; it was an elite geek object of lust.

The build quality on the original Macbook Air (MBA) was solidly built and did not flex when holding.  Heat and under-clocking of the cpu problems did plague the first versions.  Add into the mix a very bad job of thermal paste placement/application and you were better off avoiding YouTube and any Flash videos since it would most likely stuttering.  To wrap it up; the original Macbook Air was more of a symbol than a tool.  It was too expensive for its very sub par performance.  Several revisions were done to help increase performance with upgrades to video chipsets and cpus and faster memory (ddr3 vs ddr2).  However, the price and performance balance just was not there for most home users.  At the same time another genre/category of computers were born; the netbook.  For those who don’t remember but the ‘official’ branding of the netbook meant that a laptop had to:  be under 10″ in screen size, run an Intel Atom CPU (no AMD cpu until recently for netbooks), and under $500 in price.  Netbooks took off, the original EeePC netbook sold out instantly.  Netbooks were great in that they cannibalized laptop sales and pricing and in turn the general overall cost for a laptop dropped sharply in the next year.

Prior to Oct 2010, the only way one could really get an ultra-portable computer running Mac OS X was to hackintosh it.  The MSI Wind and Dell Mini lines shared common components with the current Intel-based Macbooks and Macbook Pros and in turn could run a hacked/ported version of OS X Snow Leopard.  However the experience was lackluster at times; upgrades to OS X always wrecked your install, not all devices/components had drivers, sleep may or may not work and the hardware just wasn’t Apple build quality (most netbooks are very cheaply built, why else do they cost only $300-$400? exactly).

Fast forward to late October 2010, Apple revamps the Macbook Air line with a new unibody design that is thinner and lighter than the original and also answered the prayers of a ton of 12″ macbook followers by releasing the Macbook Air 11″.  The 13″ and 11″ are nearly identical in design but differ in specs with the 13″ of course having a faster cpu and also larger ssds.   Today, we’ll be focusing on the 11″.

The Macbook Air 11″ is finally Apple’s answer to the netbook category; more its middle finger to the category.  With an entry price of $999 for the slower 1.4Ghz Intel U9400 CPU, 4GB of DDR3 RAM (non upgradable) and 64GB Flash SSD (non upgradeable) and a price of $1,399 for the top end model (1.6Ghz U9600 CPU, 4GB DDR3, 128GB Flash SSD) it already prices itself out of the netbook category.   Here are the specs of the Macbook Air 11″ that I purchased and will be reviewing: 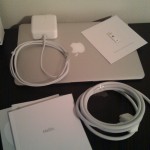 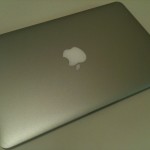 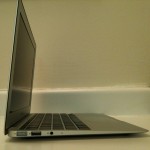 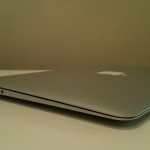 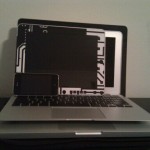 There is no flexing when holding the base with one hand and feels very solid when tossed or handled. The screen is the glossy variety which has become the de facto for most laptops and there are no matte screen options (at least not directly from Apple, TechRestore, a third party companies will do a screen replacement). 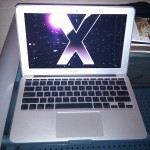 The top bezel of the Air has a new Facetime camera and the backlit keyboard option has been removed from both the 11″ and 13″ models.  There is also no infrared sensor so your Apple remote won’t work anymore either. 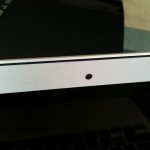 The keyboard is a near full keyboard; I’d call it a 9/10’s of a full sized keyboard.  The keys do not give very much spring and are not raised very high due to the design of the Air.  At times, the keys do feel a little too soft, not enough tactile feedback.  The touchpad is a dream and even larger than the previous Airs.  It does all of the 2-4 finger gestures that the Macbook Pro lines can do; like any Apple laptop it is still the best touchpad on a laptop.  I still do not understand why most laptop makers don’t improve their touchpads to Apple’s level; its one of the most important pieces to a laptop and something you use EVERYDAY or anytime you use your laptop. 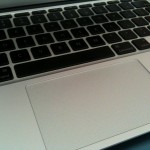 There is no SDHC Card reader on the Air 11″ which is a bit annoying, however there are two USB 2.0 ports (one on each side).  There is also a Mini Displayport and it does support Audio over HDMI so you can buy a third party adapter to plug it into your HDTV and also a Headphone/Microphone mini-jack.

I also own a Macbook Pro 13 (late 2009 model) and in turn ran benchmarks on it in a nearly identical setup as comparison.  I used several benchmarking applications (XBench, GeekBench, 3DMark2006) on both the Macbook Air 11″ and the Macbook Pro 13″ and even ran benchmarks in VMware Fusion and in a Windows 7 Boot Camp installation.  All reviews I have seen thus far have been for the 1.4Ghz version and not the 1.6Ghz. I personally believe the 1.6Ghz is worth the upgrade price and wait (has to be built and then sent from China, not in Apple Stores) and the results may back it up. Lets take a look at the results.

GeekBench (Higher is better in this test): 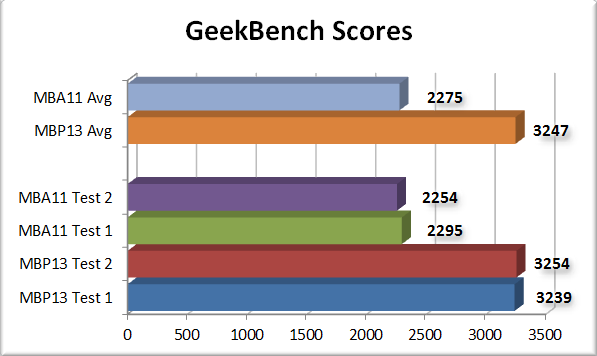 XBench: (Higher is better in these tests) 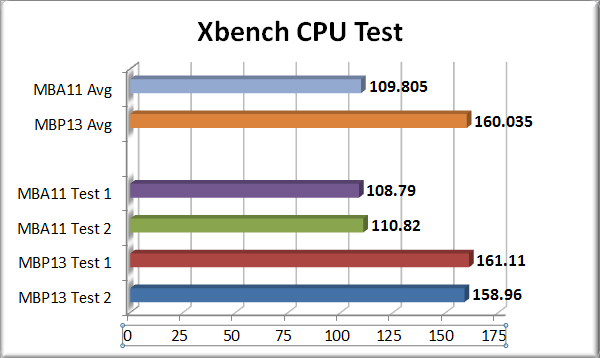 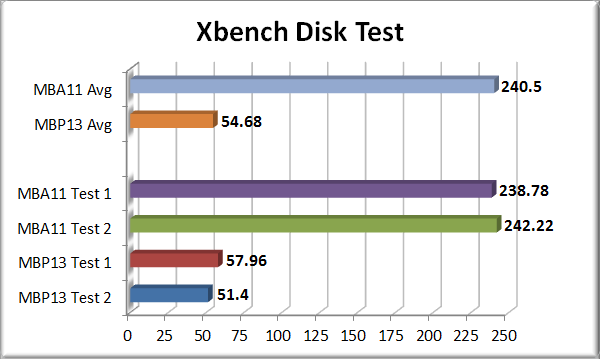 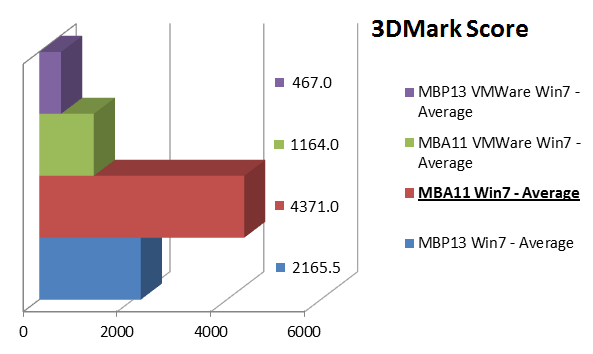 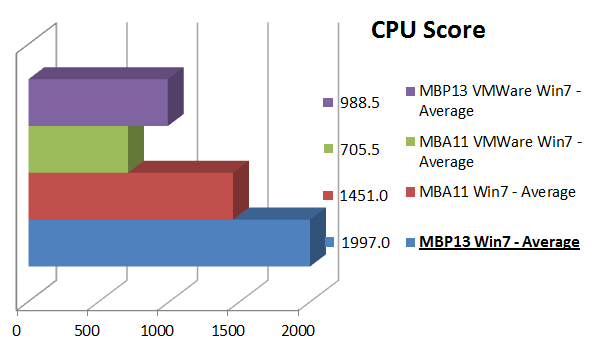 In reality, the Macbook Air feels very fast.  The Flash SSD is probably the main reason behind this but the fact that by the time you have the Air opened and its already on and ready makes it easy to fall in love with.  Suspend and Resume from Suspend times were in the 2-3 second range; boot up time is around 10-12 seconds and shutdown is about 3-4seconds (longer if more apps are open).  Again being able to open up your laptop and instantly be working or surfing or searching just puts a smile on your face.

I was able to comfortably run VMWare Fusion and Windows 7 to work with my work VPN connection and Outlook 2007 and switch back between iTunes and Safari in OS X without any slow down or pinwheels.  Again, I also have 4GB of RAM and 2GB allocated to my VMWare virtual Win7 machine.

iMovie encoding times were in line with my late 2009 model Macbook Pro 13 since it has a 5400RPM harddrive.  I could comfortably navigate in HD movie clips without lag.  However heavy duty Final Cut type of projects would definitely suffer and lag.  The Air is not a gaming / video intensive machine or is intended to be.  It can easily handle most YouTubers or blogger video needs (such as mine).

Windows 7 ran very smooth in Boot Camp and actually killed my Macbook Pro 13 in most 3DMark 2006 benchmarks.  Again, the SSD really show its strengths and benefits on the Air.

-Design and build quality for its size is top-notch and no competing laptop maker has an answer in my opinion.

-Touchpad is also topnotch and still the best made by any laptop maker.

-ITS FINALLY AN 11″ LAPTOP THAT OFFICIALLY RUNS OS X! (there is a very large community of  hackintoshers)

Lastly, STOP COMPARING IT TO A NETBOOK!  I’ve owned several netbooks and even ‘pimped’ them out (added a touchscreen to my MSI Wind and 4GB RAM, 500GB HDD) and when it comes down to it you get a very underwhelming experience.  Windows 7 isn’t really made for the specs that most netbooks have and the Atom CPU is below a Celeron in specs.  Its made for energy efficiency and battery life and not processing power.  The U9600/U9400 CPUs in the Air get about twice the score on most CPU benchmarks and the same can be said on 3DMark2006 when the Air is running an OS it wasn’t designed to be ran on.  So in that perspective, the Air’s price really is on par with what a netbooks price and performance is (2x performance of a netbook, 2x the price).

Price is a bit high but you pay for what you get, a $300 laptop is a $300 laptop as the $999+ Air is a $999 laptop.  This laptop isn’t for everyone but if you want an ultraportable laptop that runs OS X Snow Leopard then this is your laptop.  Its nearly instant on/off times and performance for most non video intensive/gaming tasks make it a sell to any traveler or blogger or student that needs a full laptop but not the weight and bulk.

Jimmy Shttp://blogs.tech-recipes.com/jimmyselix
Jimmy Selix is an early adopter that loves to be one of the first on the block to have the latest and greatest in technology and gadgets. Another love of his is being able to share his knowledge to others seeking it. Feel free to drop any comments or questions that you may have.
RELATED ARTICLES
Apple Mac