Living in the USA can be interesting in regards to mobile phones and carriers.  Like most countries, we have several different carriers and cellular network standards.  This reference will outline the frequencies used and network compatibilities of the top carriers in the United States.

This guide will not go into depth on how to make phones work on other networks.  I’ll explain the network standards that each use and whether you can use another carrier’s phone with another carrier.

T-Mobile USA and AT&T are GSM providers, while Sprint, Verizon, MetroPCS and US Cellular utilize CDMA.  Most of the world actually uses the GSM standard including most of Europe.

Below are charts of the major USA cellular carriers and the frequencies their networks use and the standard (GSM vs CDMA). 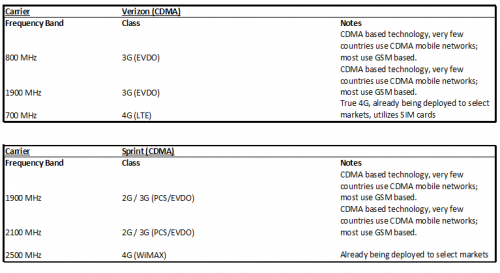 This is where things can get confusing and even more confusing.  In the USA, you can use any SIM unlocked phone from AT&T on T-Mobile and vice versa, but you will not get 3G on the other carrier since they use different bands and most phones do not support both.

What is SIM Unlocked?  When T-Mobile sells a phone to a customer, the phone’s SIM Card reader is locked to only use T-Mobile sim cards, however after being on them for 41 days, you can request a free sim unlock code so that you can then use any SIM Card in it.  AT&T and T-Mobile both use a SIM Card to store your information and in theory, you can swap your SIM Card from phone to phone and have your account on the phone w/the SIM Card.  This is getting a bit more harder to do these days if you go from say a Blackberry to an Android phone on either since there are different data plans.  Most carriers are using IMEI filtering to know what type of phone you have, and in turn, block internet or services if you’re not subscribed to them.

Also note that you can use other unlocked GSM phones on T-Mobile USA and AT&T, however 3G again will be limited to AT&T phones (depending on bands).  T-Mobile’s 3G band is not compatible with any other European or USA carriers (at the moment) and in turn to get 3G/4G on T-Mobile USA you need a branded phone from them.  You can still receive and make phone calls, text/sms and get basic EDGE (2G) data service on an AT&T phone.  So if you don’t need 3G and just need phone coverage, you should be fine (be sure it has the 850MHz band).  If you get a world GSM phone, I recommend a Quad Band (850/900/1800/1900mhz) since it will get the 850MHz band that is used mainly in rural areas in the USA.

MetroPCS, US Cellular, Sprint and Verizon phones in theory should work on each others networks; however, the software and the way the network works makes them incompatible.  You basically need to get EPST/DST/PRL settings and then program your phone with them, and you would need the ESN in their database. A hacker would need a lot of time, luck, and inside work to get it working.  Plus, they may be using IMEI type of filtering too. (I do not have personal experience on using CDMA carriers;, I mainly use GSM based phones/networks)

Hopefully, this gives you a quick start and breakdown of the network standards and basic phone compatibilities in the USA.

Jimmy Selix is an early adopter that loves to be one of the first on the block to have the latest and greatest in technology and gadgets. Another love of his is being able to share his knowledge to others seeking it. Feel free to drop any comments or questions that you may have.

Jimmy Shttp://blogs.tech-recipes.com/jimmyselix
Jimmy Selix is an early adopter that loves to be one of the first on the block to have the latest and greatest in technology and gadgets. Another love of his is being able to share his knowledge to others seeking it. Feel free to drop any comments or questions that you may have.
RELATED ARTICLES
Internet