This recipe will explain how to setup your Airport Extreme Base (AEB, 802.11n compatible) to allow your XBOX 360 Slim to connect wireless to it and get N speeds (up to 70Mbps).

The new Microsoft XBOX 360 Slim is much like the PS3 Slim, a revision on the launch console model. The new 360 offers several revisions including built-in WiFi with 802.11b/g/n support, N being the fastest at the moment.

I initially had problems getting my new Apple Airport Extreme Base and 360 Slim to connect and get the 802.11N speeds, it would only connect at the G speeds or not at all. Having 802.11N speeds really helps when your streaming HDTV from your Windows 7 Media Center PC (which I am). Here is what fixed this.

2. Double-click on your Airport Extreme Base (AEB) 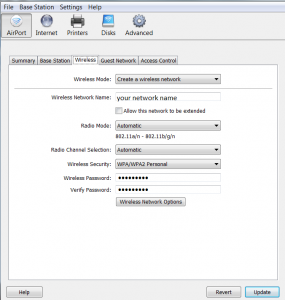 4. Name your network / SSID if you haven’t already.

Wireless Security: WPA/WPA2 Personal recommended but can be any

5. Then hit the Wireless Network Options button.
For most these may be the only settings you need to change back, but for geeks like me who setup everything custom; i had to change a few more options in this area. 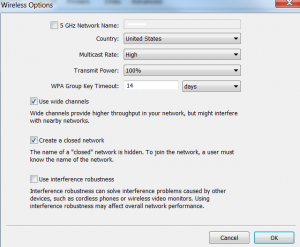 You can set the other options to your preference. Once done, click on OK.

6. Then back at the Wireless screen, click on Update to save changes to your AEB and reboot it.

Click on Configure Network and go through the wizard. Hopefully once you connect to your wireless network / AEB, you will see the 802.11N speed listed.

Most people may not have this problem if they just left most of the advanced wireless options to automatic or alone (main thing again is the 5Ghz Network Name to be unchecked and in turn the same as the 2.5Ghz/normal wireless network!).  Gotta love how Apple makes it almost to easy at times.

Jimmy Shttp://blogs.tech-recipes.com/jimmyselix
Jimmy Selix is an early adopter that loves to be one of the first on the block to have the latest and greatest in technology and gadgets. Another love of his is being able to share his knowledge to others seeking it. Feel free to drop any comments or questions that you may have.
RELATED ARTICLES
Games